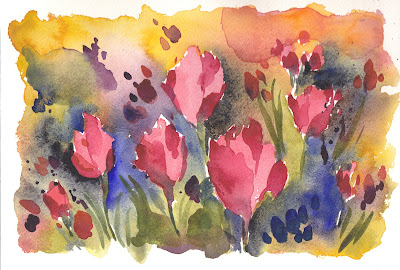 Last fall, I helped plant a garden for the Pink Tulip Project which is a fundraising project that benefits the Women's Cancer Fund at the Maine Cancer Foundation. Gardens are established to raise funds, create awareness and support for those who have been affected by breast cancer and beautify the community.
On my run the other day, I noticed that they are all in full bloom around the city. Everyday, Sophie and I walk by this one blooming in front of a hotel up the street. I caught it the other evening as the sun was setting. 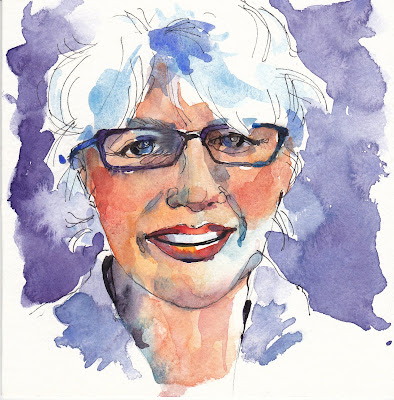 Still obsessed with doing portraits for Julia Kay's Portrait Party on Flickr. Above is my friend Donna. Together, we survived the Dalvero Academy boot-camp last summer and we are going back again. 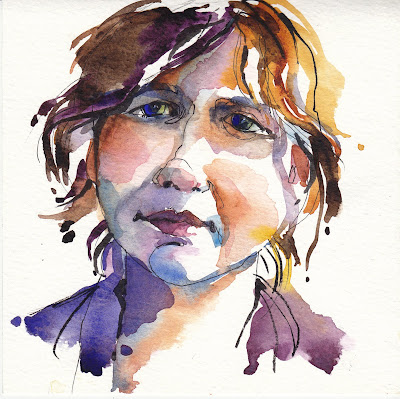 The very talented Katarzyna aka Katek 29. You can see her beautiful work here.
at 8:11 AM 11 comments:
Email ThisBlogThis!Share to TwitterShare to FacebookShare to Pinterest
Labels: Pentel Brush Pen, Pigma Micron pen, Pitt Brush pen and watercolor 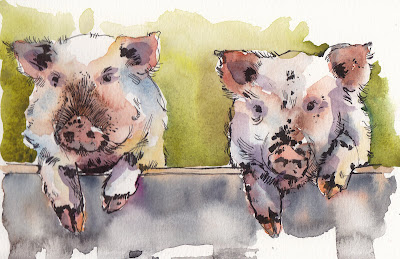 I live in the heart of the city, but the country is just over the bridge. On my way to getting my computer fixed, I passed by nurseries and farms all enjoying a beautiful spring day here in Maine. 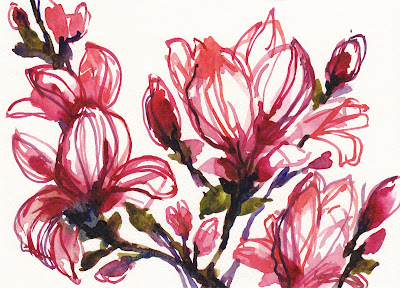 Spring is very early this year and everything is blooming like crazy. It is glorious. Beautiful flowering trees including Magnolias are bursting out all over the city. 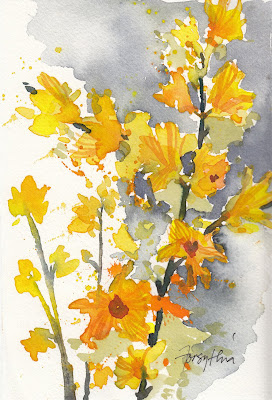 Forsythia is always the first sign of spring and it is such a vibrant splash of yellow after a long gray winter. 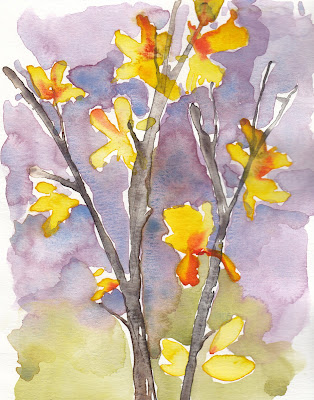 at 9:39 PM 15 comments:
Email ThisBlogThis!Share to TwitterShare to FacebookShare to Pinterest
Labels: ink and watercolor

More portraits and some flowers 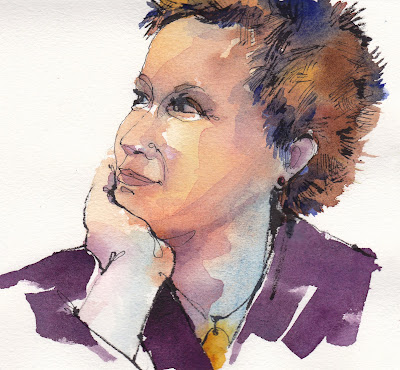 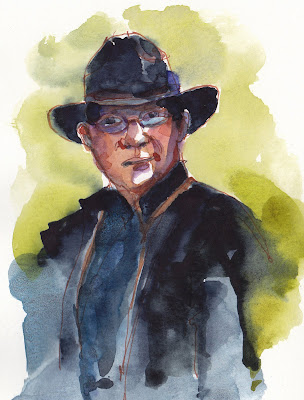 I am still enjoying (okay, I'm a bit obsessed) for doing portraits for Julia Kay's Portrait Party on Flickr. It is such great way to practice, practice, practice. These studies are quite challenging. I try to capture likeness through lines, marks and color. I then have to post them along with portraits from other talented artists. Then of course, the person I am sketching gets to see the portrait also. Yikes—scary! 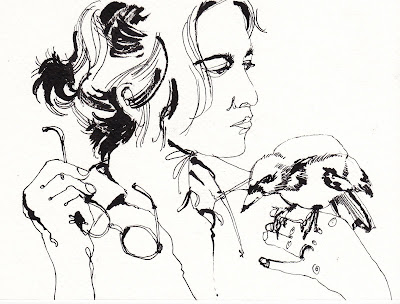 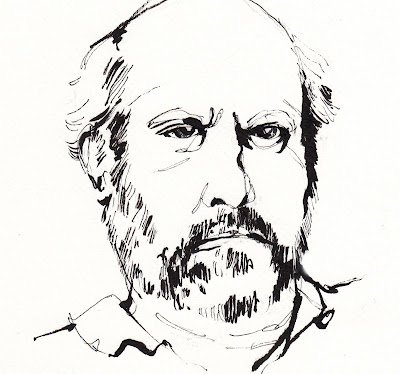 I usually add color to most everything I do, but decided to submit these two just as ink sketches. 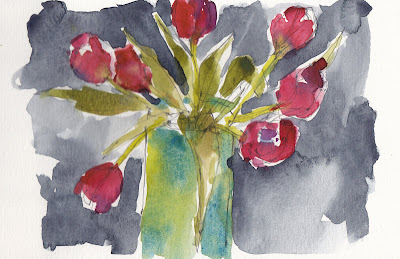 A quick sketch of a bouquet of tulips that were used as a photo-shoot prop. Once again, by the time I got around to sketching them they were on their way into the trash.
at 9:23 AM 8 comments:
Email ThisBlogThis!Share to TwitterShare to FacebookShare to Pinterest
Labels: Pentel Brush Pen, Pigma Micron pen, watercolor and pencil 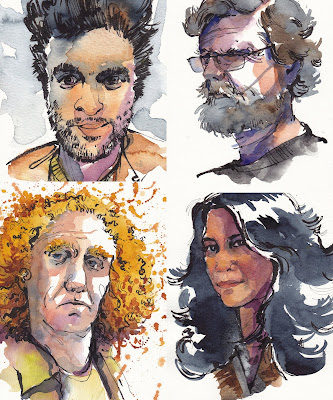 I am having a great time doing portraits for Julia Kay's Portrait Party on Flickr. I can't stop doing them, but I can be like that about many things. Like when I love a certain food, I will want to eat it for every meal. Right now I am really into edamame. So it's lots of edamame and portraits. 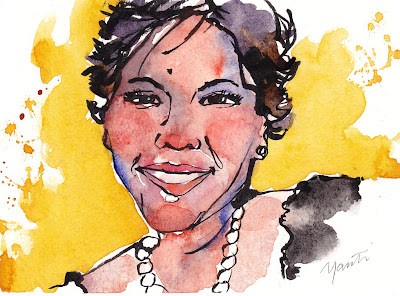 We will be going back to Bali soon, so I am getting into my Bali mind set. This is a portrait of my friend Yanti. 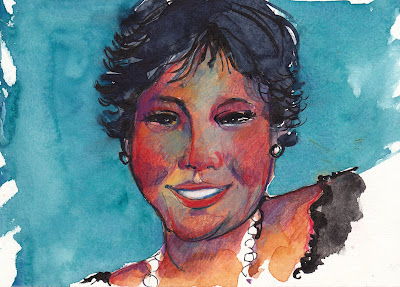 And then I did beautiful Yanti again, mixing it up a bit with more dramatic color and pencils. 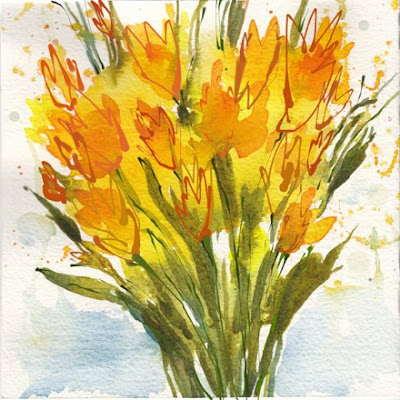 A quick watercolor of the Easter tulips before they got tossed. I added some digital lines using Corel Painter. Digital art is a total unknown area for me, but I am curious about it. It is quite awkward for me to make my hand move the cursor to do the work or go the direction I want. It is not like moving a pen around on a piece of paper, but you can hit the "undo" button. I do worry about the work looking too "digital" but I must keep learning.
Back to more portraits.
at 10:09 PM 21 comments:
Email ThisBlogThis!Share to TwitterShare to FacebookShare to Pinterest
Labels: colored pencils and digital lines, ink, watercolor

Visiting my parents in California

I grew up just south of San Francisco, near Stanford University. I am 5th generation Californian on my mom's side of the family. My Parents still live in the house that I grew up in. Built in the late 1950's it is in a neighborhood nestled in the hills overlooking the San Francisco Bay. 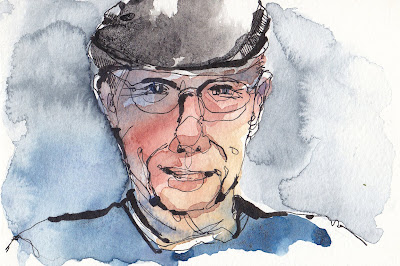 This is my father Jim Lawson, 84 years old. Walks two miles a day and goes to the gym to workout with Todd, his personal trainer, three times a week. He is in amazing shape. Every evening he looks forward to watching Jeopardy with a glass of Two Buck Chuck. Always eats an artichoke with his dinner and has for 15 years. 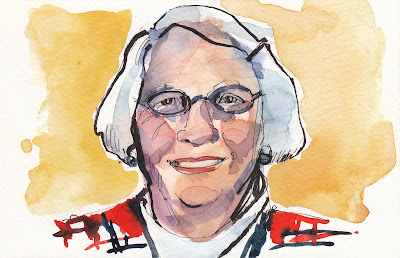 My mom, Jacqueline Lawson is 85, raised three kids through the 60's and 70's. She says it just about did her in. Says her life changed in 1967, which coincidentally was the year I turned 13...HA!
Now her favorite child is a rescue dog named Freddie Brown. A Cockapoo who is the cutest thing on four legs, except for Sophie. Besides walking the dog, she works out at the gym everyday—WOW! 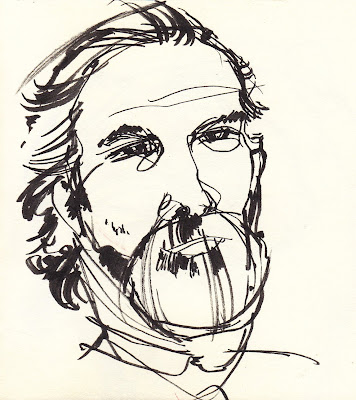 My little brother James. Sometimes it is hard for me not to think of us still as kids. I look across the room and wonder "who is that guy", and think, "wasn't it not so long ago that he was just an annoying little 10 year old kid?" 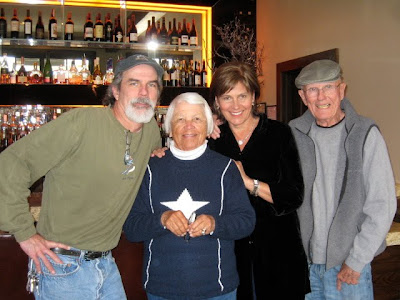 Here we are, still going strong. It must be all those artichokes! That's me in between my parents, the oldest of three kids.
at 2:10 PM 19 comments:
Email ThisBlogThis!Share to TwitterShare to FacebookShare to Pinterest
Labels: ink and watercolor 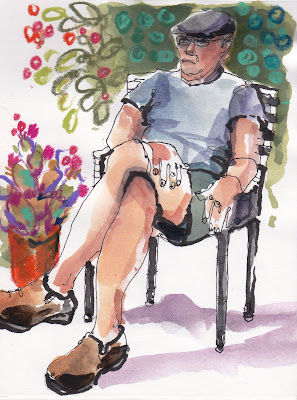 My mom and dad and I spent a lot of time sitting on the patio in the warm California sun talking, reading and just being together. It was a nice way to reconnect. My father always wears a hat and a bit of a grimace. I had to keep telling him to turn that frown upside down. 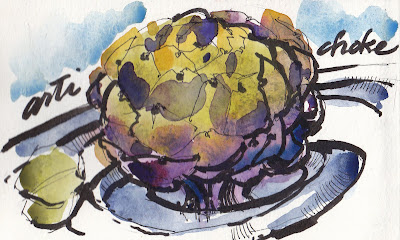 My father eats an artichoke a day with dinner and has for at least 15 years. He steams them in a little water with lots of garlic and fresh lime juice from their lime trees. He believes they are one of the reasons for his good health and longevity. He says it's all those antioxidants. 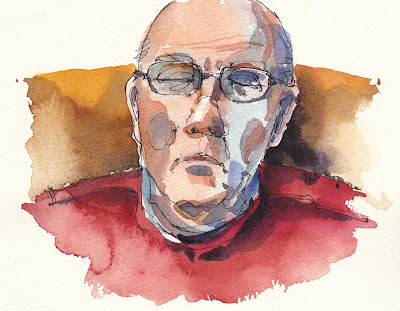 After his morning walk and a gym workout my father usually takes a nap (or two). Man he deserves it! 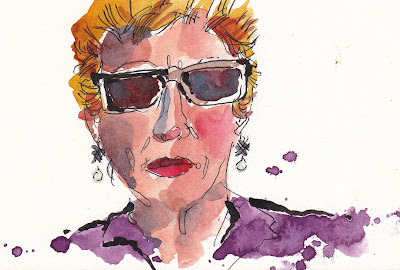 This is my friend Tris. She punched me in the stomach on the playground the first day of Kindergarten all those years ago. She was very bossy, even then, and we have been friends ever since. We have quite a history.
While I was telling her an incredulous story, I was sketching her, so that's why she has that serious concerned look on her face. However, she did keep telling me to make her hair spikier and take away the wrinkles. Like I said—BOSSY!
at 1:48 PM 4 comments:
Email ThisBlogThis!Share to TwitterShare to FacebookShare to Pinterest 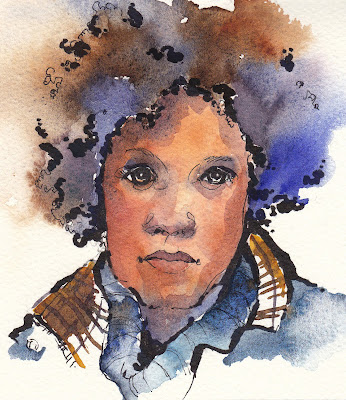 Portrait of MiaBia DC for Julia Kay's Portrait Party on Flickr which can be seen here. 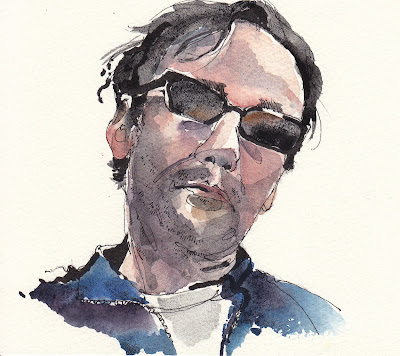 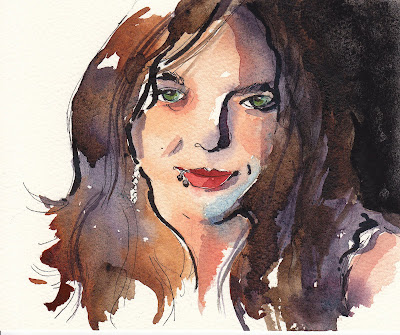 Portrait of Lucia Barrantes Egana from the Portrait party.
at 11:02 AM 7 comments:
Email ThisBlogThis!Share to TwitterShare to FacebookShare to Pinterest
Labels: ink and watercolor
Newer Posts Older Posts Home
Subscribe to: Posts (Atom) 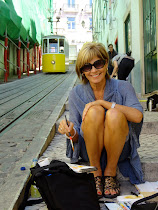 Jennifer Lawson
Living, sketching and painting on the coast of Maine.

This is a Flickr badge showing public photos and videos from jlawsondesign. Make your own badge here.